iDrinkCoffee.com Club - Earn 382710 Reward Points Worth $382.71!
This is a commercial product and not subject to our return policy

The serious baristas dream machine. In a compact footprint, Slayer Single Group packs the same commercial head, steam valves, and brew actuator as its predecessors plus a few extras. With a new touchscreen interface that assists in flavor profiling and temperature management, you're looking at a one-group espresso machine with unprecedented capability.

Enjoy the best that your espresso has to offer with Slayer's signature flow control. In both manual and semi-automatic modes, the Single Group divides extraction into multiple stages and manipulates flow rate to highlight the inherent sweetness of espresso. Extreme grind fineness, made possible by patented pre-brew technology, lends to an extraordinary body and beautiful crema. Around the world, professional and amateur baristas alike are making exceptional coffee with the Slayer Single Group. Warranty: 1 Year of parts and Labour

Who provides the warranty for this product?: iDrinkCoffee.com is an authorized service centre for Slayer.

3 Reviews
Write A Review
Thank you for posting a review!
We value your input. Share your review so everyone else can enjoy it too.
share
share
share
Thank you for posting a review!
Your review was sent successfully and is now waiting for our staff to publish it.
Clear All
Filter Reviews
Taste Quality Looks Filter Machine Shots
Service Pre Infusion Screen Point
Taste Quality Looks ...
Filter Machine Shots
More Filters
FILTERS Clear All
Rating
Reviews
Show 3 Reviews
Rating
Images & Videos
Clear All
3 Reviews
Sort: Select
Updating Results
Verified Reviewer
0 star rating
2020-05-11
Review by Anonymous User
On
share ' Share Review by Anonymous User facebook facebook Share Review by Anonymous User twitter twitter Share Review by Anonymous User LinkedIn linkedin Share Review by Anonymous User
2020-05-11
Was this review helpful? 0 0
D
Dred
Verified Buyer
5 star rating
2019-12-30
A Whole New World
Review by Dred on 30 Dec 2019 review stating A Whole New World
I did my due diligence on this purchase. I drove down to Seattle (from Vancouver) visiting Slayer’s factory (a very cool, small-batch facility near the baseball stadium) and their separate showroom (stylish, tucked into a heritage building on the waterfront near Pioneer Square). I also visited the La Marzocco Café where they have all of their machines on display (a very nice space and location as well). I also paid a few visits to a café in Vancouver – 33 Acres Brewing on E. 8th Ave – that has a commercial Slayer, talked with 3 different baristas – they all recommended it - and the independent maintenance guy who would service the machines locally (the size of the machine makes local service a must). He said they were easy to work on, and Slayer was great at support.

In Seattle I was able to see the customized versions of the GS3s and the Slayer single group. I pulled multiple shots on each machine. And since both visits were by appointment I had experts there to answer questions.

My La Marzocco impressions first. The LM machines started off as my first choice because I really wanted to avoid having to plumb-in a machine due to the complications related to where I wanted to locate it in my kitchen. But I was singularly unimpressed by the build quality of the LM machines; compared to Slayer they look cheap. And the shots they produced were unremarkable.

The drip tray, innovative in concept, fits poorly. It would be annoying every time you had to remove the tray and fill the water (and spill it). The stock versions of the machines begged for an upgrade; but the upgrades look better in the photos than in person. The custom caps, portafilter handles and paddles don’t look, feel or fit like one would expect for a couple of thousand-dollar worth of upgrades. And the GS machines look bulky – probably because of the large drip trays.

The Slayers on the other hand are race-car sleek, and look like they’d survive Armageddon. The stock machine – which I bought – looks spectacular. It has Apple-level refinements. Their wood portafilters, actuators and handles are built by a small, custom woodshop in Seattle. They’re gorgeous and feel gorgeous too.

If you want customization, they have at least 20 different wood options (more than shown on their website). Four metal X-leg options (avoid the sandblasted aluminum because it permanently shows drip stains), numerous panel, metal and paint options, all of which can be combined as you see fit. (Add 14 weeks to the delivery time and a couple of thousand or so to the price.)

But the machine has to be plumbed and depending on location, that’s not an easy thing. The water has to be filtered appropriately and must have decent pressure (3-5 bars) or the warranty is invalid. Water filters (required) reduce water pressure. And the countertop must be drilled.

Cutting to the chase, I found a filter that effects the water pressure the least: the 3M Aqua Pure filter rated at 2.5 gallons per minute (4.2 bars in my home). Fortunately, my Vancouver water is a proper ph-level to avoid scaling, and only needs filtration for chlorine and other easily filtered particles. (Reverse Osmosis systems have a much greater impact on water pressure.) The filter is big, so measure your under-sink space. It is rated at 6000 gallons so won’t need frequent changes. My plumber installed it, the water connection, and a separate drain line - which has to have the appropriate vertical drop since, unlike water pressure, drainage relies on gravity only. And the vertical drop limits the distance you can be from a main drain.

As for a Flojet option instead of plumbed. Even their newest version reaches only 1.0 GPM (2 bars). So you need an accumulator to increase the pressure. But the plastic bladder in the accumulator affects the taste. And the pump is noisy. Google the YouTube video of the guy installing one for his Slayer.

As for Slayer’s performance. I’ve had the machine installed for two weeks. I expected a bit of a learning curve, but my first shot was delicious. For now, I’ve stuck with the factory settings for the pre-brew, and set the pressure to 10 bars, which produces 9 at the brew-head. So far, I’ve only altered the grind settings, and the pre-brew and brew-time combinations.

My go-to coffee is Hair Bender (Stumptown), a notoriously finicky blend which I get from my local coffee shop. On the Slayer, it’s easy to draw out different flavours from the beans. That’s even more the case with single origins. I’ve tried Stumptown Indonesian and Costa Rican single origins. Neither brews well on a traditional espresso machine. They are remarkably delicious on the Slayer, and with different brew and pre-brew times, you can isolate the different flavours.

The machine comes with 7 and 18 gram baskets. Both have fewer holes than a VST, by design to restrict the flow. I’ve tried my VSTs. They fit fine. But I get no channeling from the Slayer baskets (the mirror set up on the machine is delightfully practical for viewing the bottomless portafilter) and channeling is even less of a problem when you use the pre-brew option. I swear by the VST baskets, but Slayer’s seem at least as good for this machine.

It’s hard to overstate the convenience of having a plumbed in machine. In hindsight, it’s really annoying having to constantly fill and drain your machine. The Slayer is super quiet. It looks smaller – rather than cramped - under the cabinets. And it’s a joy to operate.

Biggest problem to date: I’ve doubled my coffee intake; and I do wish it had a double-walled steam wand. Slayer told me that the double-walled wands accumulate internal condensation – but that seems easy enough to eliminate with a quick flush.

Finally, iDrink Coffee is a rarity: an online retailer that gets everything right. They literally nail every element of customer service and have for the 2+ years I’ve dealt with them. They promptly answered all of questions online. I talked with Slawek, who is a video star in my home, and he told me about delivery times, Slayer’s pending price increase, warranty work (local), and the freight company that delivers the machine (it took three days to get here and tracking was hugely entertaining because it displayed online in real-time). The machine showed up at my door in a very large, wooden crate.

Now it’s playing a starring role in my kitchen. 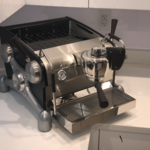 The Slayer arrived very well packed in a wood crate, machine bolted to the bottom board. Almost impossible to damage the product while shipping. Drip tray and accessories attached with Velcro straps. Excellent!
This is heavy product. Better be 2 peoples to handle and lift it. I like the rubber pads. Will never slips on top of any counter.
The quality of the product is impeccable. Stainless steel is very high grade. Wood handles are elegants. Chrome is thick and beautiful. Hoses are good quality but the drain hose could be one foot longer for easier installation.
First deception with this machine, it doesn’t come with owner manual. How comes? At this price, installation instructions should at least be included. At least, one paper with web site link to download instructions on Slayer’s site would be a minimum acceptable. Nothing at all! After finding the manual V4 on a competitor’s site, I finally installed and started the beast.
Second disappointment, the machine was leaking! I had to remove the front cover to resolve the issue. A small fitting on the group head (for pressure gauge i guess) was not tighten at all. Hand made in USA is not better than other but highly priced. Q.C. Is missing.
The touch screen is very cool but not sensitive enough in my opinion. It is as you can see on many videos on the net, not working on each activation. Get something more efficient or change the control type. Very boring to use.
On positive side this machine is doing the best espresso shot I have ever made with the third shot on it. I started trying the pre-infusion first but this was a mistake. I returned to standard shot (no pre-infusion) and get savouring shot right away. I’ll explain possibilities later. The steam is working great. First try and latte art was easy to do. I’m a very happy man now with lot of possibilities in hand for years of pleasure.
I recommend this machine and hope that Slayer improve the minor negative point I stated.
On Slayer Espresso Single Group
share ' Share Review by Deny B. on 6 Nov 2018 facebook facebook Share Review by Deny B. on 6 Nov 2018 twitter twitter Share Review by Deny B. on 6 Nov 2018 LinkedIn linkedin Share Review by Deny B. on 6 Nov 2018
2018-11-06
Was this review helpful? 4 0