iDrinkCoffee.com Club - Earn 279000 Reward Points Worth $279.00!
This is a commercial product and not subject to our return policy

Handmade in Florence Italy, the La Marzocco GS3 automatic espresso machine is in high demand for its capacity to be used equally well in the home, office, coffee bar and restaurant. The machine has a double boiler system that allows the user to operate the coffee boiler and steam boiler independent of each other. It also makes use of the PID (Proportional, Integral, Derivative) temperature control system for the coffee boiler. La Marzocco GS3 features a saturated brewing group Cool Touch stainless steel steam wand, multifunction keypads and digital display and 3.5 liter reservoir.

The machine makes use of the PID (Proportional, Integral, Derivative) temperature control system for the coffee boiler. The temperature can be adjusted by the user in a range from 85C to 100C .

The La Marzocco GS3 features a digital display with clock and below the display is the user friendly keypad with icons. You will find the hot water dispenser and hot water lever close to the keypad. The keypad icons, from left to right, stand for espresso, double espresso, coffee, double coffee, programming and tea. When in programming mode, the espresso and double espresso buttons stand for a down arrow and an up arrow, respectively. The coffee button is used to access certain menus, the double coffee button has no programming function, and the tea button is used to turn the GS3 on and off.

The La Marzocco GS3 features double boilers that allow the user to operate the coffee boiler independently from the steam boiler, reducing the consumption of energy. A 2-boiler system lets you go right from brewing to steaming with no down time, so you can make cappuccinos, lattes, and other milk drinks instantly.

The La Marzocco GS3 's saturated group results in more stable brew temperature. Because the La Marzocco group is integrated with the brew boiler (and thus "saturated" by the water within that boiler), there are fewer issues with the group cooling when idle, as one commonly sees in other groups.

To steam milk, what you need to do is press the steam activation lever and the 'cool touch ' steam wand will dispense sufficient steam for frothing cappuccinos or lattes. The machine features a boiler dedicated for steaming, allowing you to brew and steam at the same time. To prevent milk residue buildup, do not forget to run a little water through the steam wand once you are done and then wipe off the steam wand with a damp cloth.

Press the tea button on the control panel to get hot water for Americanos, teas or instant soups. Hot water will begin to flow from the hot water dispenser on the right side of the machine.

The La Marzocco features a large water reservoir which holds about 3.5 liters of water. The model is plumbable, so you can connect it straight to your home 's water supply. To keep your coffee tasting fresh, remember to rinse and clean the water tank with warm soapy water or in the dishwasher about once a month.

Espresso tastes its best when it is brewed into a pre-heated cup ' this preserves the temperature and the crema. The machine has a built-in cup warmer which is heated using residual heat from the boiler.

Please note that we cannot ship La Marzocco products into the United States. 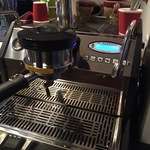